Sophie Hojo is one of the main characters in the series. Her voice actress is Miyu Kubota, a member of i☆Ris. She is an 8th grader at Paprika Private Academy. She is a cool type idol. Her assumed preferred brand is Holic Trick. And she also has a fan club called Sophie's Fan Club.

Sophie has long magenta hair that appears to come down to her waist.

She has purple eyes.

Sophie has been working in the idol industry since she was very young, and is also very popular at her school, and admired by a lot of the students.

It is shown in Episode 9 that she likes spicy food 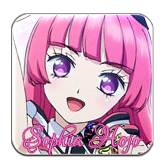 Add a photo to this gallery

Add a photo to this gallery
Retrieved from "https://pripara-prism-paradise.fandom.com/wiki/Sophie_Hojo?oldid=5101"
Community content is available under CC-BY-SA unless otherwise noted.