Mirei Minami is one of the supporting main characters of the series. She is a 7th grader at Paprika Private Academy. She is a pop type idol. Her preferred brand is Candy Alamode . She sometimes ends her sentences with -pri.

When performing, Mirei has lemon yellow hair that is partly tied up to two buns at the top with blue and yellow ribbons. She has bright blue eyes. Normally, she has long brown hair that's tied up into a ponytail and has brown eyes and wears glasses.

She is smart and very good at puzzles. Her catchphrase are "Keisandouri", meaning "Just as calculated" and "Keisangai", meaning "miscalculated." Because she is very smart, she is captain of Paprika Private Academy's disciplinary committee. She often includes -pri in her sentences, and her idol catchphrase is "A pop and a step and I've got you~!" However, that is only her idol character. Off stage, she seems to be very serious. 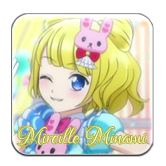 Add a photo to this gallery

Add a photo to this gallery
Retrieved from "https://pripara-prism-paradise.fandom.com/wiki/Mireille_Minami?oldid=5097"
Community content is available under CC-BY-SA unless otherwise noted.